Minecraft is a game that allows users to create their own worlds and explore them in everything they do, whether it’s constructing buildings or killing mobs. The game has been around for several years now but has since received constant community updates to keep players returning for more time after time again.

When it comes to Minecraft, players can do many different things to customize their game. One of the most popular ways to change the game is by using shaders. Shaders can make the game look completely different, and there are many different types available.

In this blog post, we will be discussing the 20 best Minecraft Shaders in 2022. Keep reading to learn more.

What are Minecraft Shaders?

Minecraft Shaders are essentially mods that allow users to take their gameplay experience to a whole different level. They aim to make several enhancements to the game’s visuals and the overall graphic settings for players to get a more realistic look.

These include adding lighting effects, changing the textures on blocks, and water reflections.

The 20 best Minecraft shaders in 2022 are listed below, as well as a brief explanation of each.

BSL Shaders is one of the most popular shader packs, and many people can see why. It’s realistic looking with plenty of effects to keep players entertained. Some features include sunlight shadows, SSAO, torch-lit particles, and more.

It works with almost every GPU and driver, performs well with mods that no one thought a shader pack could manage, fix issues that no other shader packs addressed before, and doesn’t intrude on your gameplay with distracting effects. Most importantly, it looks fantastic.

It is supported on Nvidia graphics cards with a minimum of 1 GB VRAM, such as the GeForce GTX 960.

Chocapic13′ is a shader pack that aims to improve the look of Minecraft by giving players higher quality textures and more realistic lighting effects.

The main goal of this pack is to make everything better without going overboard with too many fancy effects. It does an excellent job covering how dated Minecraft’s graphics are but still keeps the game feeling like Minecraft.

Sildur’s Enhanced Default Shader is a simple shader pack that adds more effects to Minecraft with the goal of enhancing the default look of Minecraft.

AstraLex Shaders tries to give Minecraft a more cartoony feel by blurring the air, so it’s not as visible.

While this makes everything look smoother, it also adds several nice effects like godrays and lens flares. The shader is compatible with both Java Edition and Bedrock Edition.

Beyond Belief Shaders takes Minecraft and turns it into a more realistic-looking game. It adds shadows to everything, which makes the world feel darker overall.

There’s also an added sunray effect, and the night sky has been completely overhauled with new stars and clouds.

Oceano Shaders is a simple shader pack that mainly focuses on reflections. This includes things like water and item reflections and makes the sky visible in end cities.

The goal is for Minecraft to feel slightly more realistic while still maintaining its original look.

SORA Shaders adds a lot of effects to Minecraft. These include shadows, godrays, and different types of dynamic lighting like sunlight and torchlight. The goal is completely to overhaul Minecraft’s look while still maintaining its overall feel.

Nostalgia Shader is a pack that aims to bring players back to Minecraft 1.7 and earlier days. This includes things like lava and water reflections, fog, and other effects that were in older versions of Minecraft but removed when shaders were added in.

Vanilla Plus Shader takes the default look of Minecraft and makes it more colorful. The world is less gloomy-looking with sunlight that can be seen through trees. Both sunrays and godrays are included, alongside different types of shadows.

Combined with this shader pack’s effects, the game looks more like a modern title than something that came out years ago.

Super Duper Shaders is a pack that changes the look of Minecraft while still having it resemble vanilla. This means that the game becomes slightly darker, but not to an extent where it feels creepy.

The water becomes transparent, making players able to see what’s underneath it and making oceans easier to spot in general.

MakeUp Shaders is a simple shader that changes the look of Minecraft with things like improved fog, moving clouds, and different types of water reflections. It’s mostly aimed at players who prefer to play in a game looks like vanilla but slightly better.

Kappa Shader adds a lot of effects like reflections and improved fog. This shader pack also includes water refractions, shadows, and godrays. Kappa Shader is compatible with both Java Edition and Bedrock Edition. 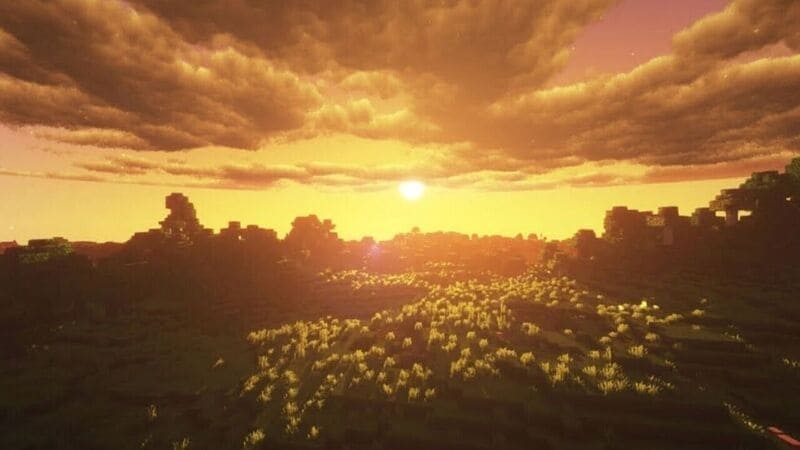 Sunflawer Shaders changes the entire look of Minecraft to make it seem like players are playing in a different game entirely.

The world is much brighter and looks more cheerful than it normally would while maintaining its original charm. This shader pack also adds things like shadows, godrays, and dynamic lighting for an extra effect.

Prismarine Shaders aims to bring players back to the old days of Minecraft with things like lava and water reflections.

This shader pack adds even more effects than other alternatives, so it’s mostly aimed at players that want to improve Minecraft’s looks without completely changing them.

All Mob Heads enables players to see all the different mob heads in Minecraft. It’s a small but useful tweak that can help improve immersion for anyone who plays using this pack.

If you like Minecraft, you should download some of the best Minecraft shaders in 2022. It is tempting to download a shader pack for Minecraft. But if you do, it can make Minecraft look worse than it already does. It is important to choose packs that make Minecraft better instead of worse.

Adding different effects to Minecraft can make the game look better than it already does, but only if these effects are made well. A good way to test out shaders is by watching plays on YouTube to see if they’re worth adding to Minecraft. This helps players know what the pack will look like before downloading it.

Overall, these are the 20 best Minecraft shaders for players to download in 2022. They make the game look better while preserving Minecraft’s original charm and world design. Even more amazing packs may be released in the future, but these are the top picks available until then.